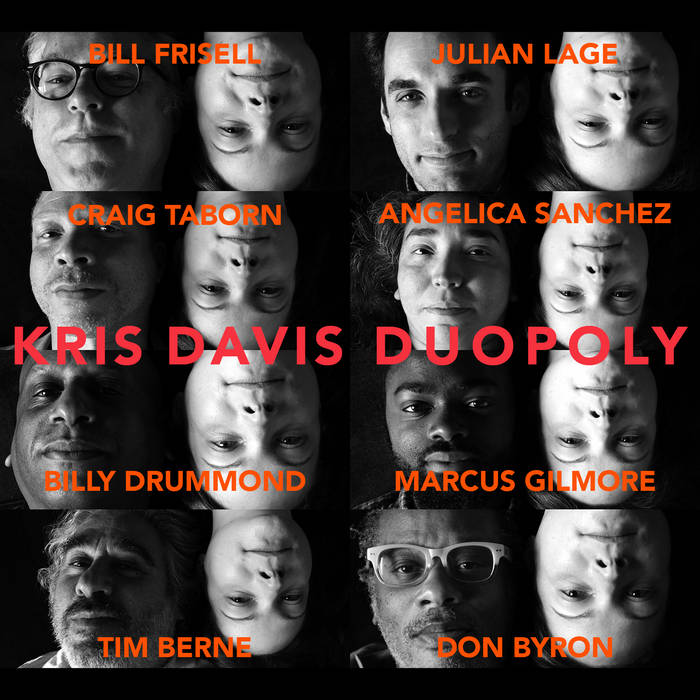 John Cratchley Taking 'aural stocktake' recently, it struck me how pervasive Kris Davis' playing was on my recent listening...I'd almost taken her for granted...sorry Kris, I won't do that again!
This is a wonderful album/project and lets her playing shine...lots of essential duets here...so pleased to hear her say (and confirm my suspicion) that Paul Bley was an inspiration...he's a cornerstone of my listening and it seems that Kris is becoming one too!

Russell Colwell I love music that is interesting and complicated and unusual enough to keep pulling me in, further and further, week after week. The music of Kris Davis and her friends here does exactly that for me.

No Mixing, No Editing, No Overdubbing, No Punching
Gutbucket Digital > All Dialogue Guaranteed Verbatim


Pianist, composer and bandleader Kris Davis, just named one of Downbeat magazine’s “25 for the Future,” has made outstanding music in trio, quartet and quintet formats; her most recent output ranges from solo piano (Massive Threads) to an octet with four bass clarinets (Save Your Breath). The next logical step seemed to be duo. After brainstorming with producer David Breskin, Davis was ready to make 'Duopoly,' a series of duos with eight colleagues, all highly regarded and accomplished improvisers. Each duo would play two pieces, one composed and the other free, 16 tracks in all. The album is out September 30th, 2016 on Davis' imprint, Pyroclastic Records.

“We decided to limit the instrumental palette of the guests,” writes Davis in her booklet text, and so she chose guitarists Bill Frisell and Julian Lage, pianists Craig Taborn and Angelica Sanchez, drummers Billy Drummond and Marcus Gilmore, and reed players Tim Berne and Don Byron. It was only later that the album’s two-part structure emerged, and within that structure, “a symmetrical, palindromic sequence,” Davis writes, “with what [Breskin] calls a ‘mobius twist’ in the middle.” In other words, the players rotate once through and then again in reverse order, with Frisell starting and finishing. The midway shift from structured writing to free improv feels entirely fluid and continuous.

“Additionally,” writes Davis, “the tracks are paired by instrument, for cohesive focus and the suggestive hint (or illusion) of a ‘phantom duo’ between each of the guitarists, pianists, drummers, and horn players.”

The DVD portion of Duopoly brings the music even more vividly to life: “We also chose to make a visual record … which we hoped would be as live and uncompromising as the music. Shot by Mimi Chakarova with one fixed camera and one handheld, the goal was for this film to have a kind of 1:1 or indexical relationship to the music itself.”

With Davis at the center of it all, her pianism a marvel of dynamic control, harmonic mystery and sonic invention, Duopoly opens with the richly contrasting sounds of Frisell and Lage: first ethereal Telecaster-plus-effects on “Prairie Days,” then the pure, warm timbre of Lage’s 1939 Martin acoustic on “Surf Curl.” The duos with Taborn and Sanchez bring out yet more facets in Davis’s playing: “Two pianos is a unique experience,” she remarks. “I can lose myself in the sound. Angie and Craig are such great listeners, and it was an especially freeing and spiritual experience for me.”

The drummers, too, are a study in contrast, hailing from different generations: Drummond the veteran, Gilmore the rapidly rising newcomer, both with complementary approaches to sound and pulse and a remarkable gift for listening. Berne and Byron, on their respective free improvisations, create one of the album’s most captivating transitions — from legato, middle-register clarinet to wrenching, extreme extended techniques on alto saxophone.

There are five Davis originals as well as two standards, in keeping with Davis’s approach on her solo piano discs: the Hakim/Sulieman/Monk classic “Eronel” features Drummond while Ellington’s “Prelude to a Kiss” features Byron in a gorgeously oblique clarinet rendering. There is one piece by Sanchez, “Beneath the Leaves,” a satisfying contrast with Davis’s vehicle for Taborn, “Fox Fire.” Davis’s original piece for Berne, “Trip Dance for Tim,” takes inspiration from the title of a great Berne composition, “Hard Cell (for Tom).”

The free pieces still convey a structural logic, as Davis remarks in the notes: “In some cases, the free playing sounds more ‘composed’ than the tunes do.” Some are first takes; other pieces needed more thinking through: “There was reconfiguration, experimentation, exploration: these were searching dialogues. This album captures the rawness, intimacy, and immediacy of that process.”